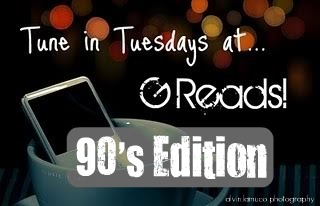 Tune in Tuesdays at GReads! is a weekly feature hosted by Ginger from GReads! that showcases music - her other passion in life besides books! Each week she posts a new or old song in hopes to gain more interest. Lets help Ginger in spreading the love of music!


I'm pretty slow on the uptake, people. I don't pay attention to what's going on unless somebody comes over and pokes me HARD. When I saw Jen at Not Now I'm Reading's picks for the last Tune In Tuesday '90s edition, I smacked myself on the forehead and then started mining through that crazy decade for music I liked. Here's what I've come up with today. You get four since it's the last one and all.

Devastated by the discovery that his wife, Helen, was murdered, Special Agent Pendergast must have retribution. But revenge is not simple. As he stalks his wife's betrayers-a chase that takes him from the wild moors of Scotland to the bustling streets of New York City and the darkest bayous of Louisiana-he is also forced to dig further into Helen's past. And he is stunned to learn that Helen may have been a collaborator in her own murder.


In this second of three books of Pendergast hunting down the truth of what happened to his "late" (is she or isn't she) wife, Preston and Child take a little detour from their usual Pendergast novel. Cold Vengeance is mostly Pendergast on his own, doing his thing without his usual cast of friends, not even all-purpose Proctor, though they do bring back Corrie Swanson from Still Life with Crows. (I was happy to see her again.) He goes a bit off the reservation; obsessed with finding his wife, Pendergast leaves no stone unturned and does things I, as a ravenous devourer of this series, would never expect. (He plays golf. How mundane.)

Cold Vengeance begins where Fever Dream left off and in similar fashion, leaves the reader with another cliffhanger and all sorts of dangling plot-lines to be concluded in the next book. In all honesty, it took me much longer to get through this book than other Preston and Child's novels; perhaps it's because I knew that there would be no real resolution? In any case, seeing Pendergast go off on his own, actively telling D'Agosta and Corrie to essentially butt out was weird if not understandable, even for him. Also, some of the details bothered me, like this one from page 307-308, where he is trying to flush out bad guys in a situation where stealth is key:

Pendergast crept along the slanting wall until he was just below the level of the toe rail, where sliding glass doors opened from the sky lounge to the sky deck.
He reached into his pocket, took out a coin, and tossed it so that it clanked against the glass doors.


My main thought when I read this passage was, You mean to tell me that Pendergast has been sneaking around a boat like Spider-man with loose change in his pockets? The man is good but not that good. Perhaps he only had the one coin? Maybe he stuck a single quarter into his pocket for just such an occasion? Not impossible for Pendergast but certainly improbable.

Overall though, I liked what happened in this book. It moved somewhat slowly in places, with disposable characters who didn't fit in the puzzle that is the main plot, but by the end, I was riveted. As is usually the case, I want the next book NOW, but at this time, I can't find any info concerning publication or even a title. Preston and Child's next book, Gideon's Corpse, will be out January 10, 2012.

Other reviews:
A Walrus Darkly
The Mystery Reader
The Speed of Write 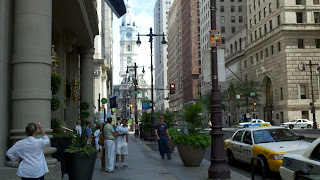 (This is the only picture I took outside and it's across the street from the hotel.)

This time last week, Jen from Not Now, I'm Reading and I were on our way to Philadelphia for Authors After Dark. She flew and I drove and when we met up, we started four days of books and laughter that I won't ever forget. Jen was the picture-taker this year and so if you'd like to see what we saw on our trip, head on over to her blog for Part 1.
Posted by Jen at 8:21 AM 3 comments:

A Picture a Day Keeps the Ennui Away

My partner-in-crime, Jane, is working on something that is taking my breath away: 365 Project. Posting a pic a day, every day this year, is giving her something to do while all the rain in Minnesota keeps her family out of the lake. Here's her pic from Sunday:

Check out her profile HERE and let her know how much your love her pictures! You know you want to.
Posted by Jen at 3:05 PM 3 comments:

I Am Three Years Old

This here blog is currently a mess. I promise that I will be working on it just as soon as I figure out what I'm going to do here.

I'm not a big anniversary celebrator (or at least I don't feel like it with this one) but I suppose I should commemorate it somehow so how about I just tell you about what I made for dinner tonight? We had Panfried Steak (aka steak au poivre) and Baked Potatoes. No pictures because, well, it's steak. Who hasn't seen a picture of steak before?

Quickly rinse the steaks under cold running water and pat dry with paper toweling. Generously sprinkle both sides of the steaks with pepper and gently press it into the meat with your hands. Loosely cover with plastic wrap and let stand at room temperature for about 20 minutes.

In a saute pan or heavy skillet, sprinkle a fine layer of salt over the bottom and place over high heat. When the salt just begins to brown and the pan is almost but no quite smoking, add the steaks and cook until well browned on the bottoms, about 5 minutes for medium-rare. Turn the steaks with tongs to prevent piercing and releasing juices. Reduce the heat to medium-low. Top each steak with about 1 tablespoon butter and sprinkle each with about 1 tablespoon Worcestershire sauce, or to taste. Add the shallot, distributing it evenly around the steaks, and cook until the steaks are done to your preference, about 10 minutes total for medium-rare. Frequently stir the shallot in the pan drippings, adding a bit more butter and Worcestershire sauce if needed to prevent the meat from sticking to the pan.

Remove the steaks to warmed plates. (I nuke mine in the microwave for 1 minute. It really does make a difference.) Add the lemon juice to the pan, scraping the sides and bottom to loosen any browned bits and cook about 1 minute. Remove from the heat, stir in the parsley, and pour over the steaks.

Tip: Who knew it's not such a good idea to sear two steaks in your brand-new not non-stick 12" skillet on Super-High heat without breaking it in first? *sigh*

For the Baked Potatoes: scrub russet potatoes well until clean, pierce with fork multiple times, and bake @ 350 degrees for 1-1.5 hours. They're done when they give when you squeeze them gently.
Posted by Jen at 11:14 PM 1 comment:

Every crime scene tells a story. Some keep you awake at night. Others haunt your dreams. The grisly display homicide cop Jane Rizzoli finds in Boston's Chinatown will do both.

In the murky shadows of an alley lies a female's severed hand. On the tenement rooftop above is the corpse belonging to that hand, a red-haired woman dressed all in black, her head nearly severed. Two strands of silver hair -- not human -- cling to her body. They are Rizzoli's only clues, but they're enough for her and medical examiner Maura Isles to make the startling discovery: that this violent death had a chilling prequel.

Nineteen years earlier, a horrifying murder-suicide in a Chinatown restaurant left five people dead. But one woman connected to that massacre is still alive: a mysterious martial arts master who knows a secret she dares not tell, a secret that lives and breathes in the shadows of Chinatown. A secret that may not even be human. Now she's the target of someone, or something, deeply and relentlessly evil.

Cracking a crime resonating with bone-chilling echoes of an ancient Chinese legend, Rizzoli and Isles must outwit an unseen enemy with centuries of cunning -- and a swift, avenging blade. (From the dust jacket.)

Gerritsen's Rizzoli & Isles series is pretty new to me. I downloaded The Surgeon onto my nook during the hiatus and soon got the attention of my local librarian after checking out the rest. Why it took me so long to discover that is a mystery as I read Gravity several years ago after picking it up at a library book sale and liked it well enough to not deter me from ever reading her again. Starting with The Surgeon, this has been a consistently well-written series and I have enjoyed reading each one. The Silent Girl fits into the world of Jane Rizzoli just as well as the others and it delves into the connections between Boston's Chinatown, missing teenage girls and a tragedy that still haunts the city.

I liked how Gerritsen used the superstitious and mysterious nature of the Chinese people and their culture to frame the whodunit in The Silent Girl. She does that well, I think, Gerritsen: using a culture or even supernatural elements to keep Rizzoli & Isles on their toes. Here, Rizzoli begins truly wondering whether or not Sun Wukong, the Monkey King, is actually running around Boston, exacting vengeance while simultaneously protecting her from harm. Gerritsen adds a new recurring character, a Chinese detective named Johnny Tam, to the mix and I hope he's here to stay. He's a good reminder to Jane of how hard she had to work to fit in to the police department.

Also, the subplot of Rizzoli's family continues to entertain me. Watching Jane cope with two parents who are trying to live their second childhoods gives a realistic touch to a fictional character. I am just waiting for Jane to knock Frankie on his butt once and for all. Maybe in the next book?

Tess Gerritsen's website
Posted by Jen at 10:32 PM No comments: