As I mentioned on Twitter a few days ago, NYCC is the just about most exhausting fun I have had in some time. (It may be tied with taking small children to the beach.) I got to meet my fellow blogger Jen D. and spied a few others I recognized. I scored lots of free books, bookmarks, tote bags, and a few autographs. I saw some really cool costumes. I learned some tips on what not-to-do while visiting in NYC. For example, do not hold a venti cup of anything from Starbucks over your lap while riding in a taxi. There should be signs. I also discovered that anime fans are hard core. Hard. Core. A suggestion if I may for the people who coordinate these conventions: please do not schedule book panels next to the big-ass room where the anime fans scream as they watch people breakdancing and they get extremely loud and obnoxious. It sounded like a nightclub out there and the door to our room wouldn't shut properly. Thank you.

So here we were, Jen D. and I, standing in line for the Jim Butcher book signing. (I am on the right.) This was day two, aka Saturday or The Day of Insanity. We stood there for just over an hour, waiting somewhat patiently so I could walk up to Mr. Butcher and stare at him as if I was Spongebob in one of my favorite episodes. He signed Jen D.'s book too. 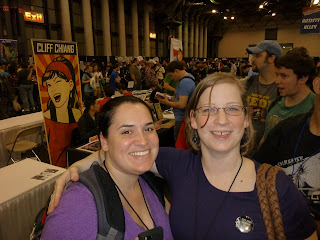 But I'm getting ahead of myself. Day one was great but unfortunately I don't have many pictures because Spider-man had the "good" camera that day. 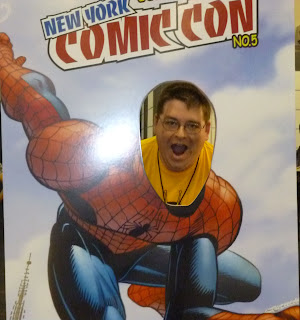 The Two Jens went to a few panels that day. First up was Fighting Like Cats and Dogs: Shapeshifters and Paranormal Romance. This was moderated by Jeaniene Frost and showcased Pamela Palmer, Jocelynn Drake, Margaret Ronald, Marjorie M. Liu, and Juliana Stone. I was familiar with all but Juliana Stone and managed to meet her later and get a signed copy of her newest book in her Jaguar Warriors series, His Darkest Embrace. Jen won a huge stuffed tiger at that panel and I wish I had a picture of her and her boyfriend sitting with it on the subway. *snicker*

Much wandering ensued (after all the chaos). Truth be told, I spent most of my time cruising up and down the sections where all the book publishers were. After a while they probably started hiding stuff when they would see me coming.

I also got my copy of Acheron signed by Sherrilyn Kenyon. She missed her kids that day.

That evening, the geniuses behind this shindig managed to schedule three, yes count them THREE panels I wanted to see all at the same time. Fantasy Writers Panel (7:30-8:30), Venture Brothers (8-9), and the James Marsters Spotlight (8:45-9:45). I ended up seeing the Venture Bros. but little did I know that the PENGUIN YA and Adult Authors Talk Monsters, Myths, and Mayhem in Literature panel with Anton Strout and Seanan Mcguire was going on at the same time. Had I known that I would have dumped Jackson Publick and Doc Hammer like a hot potato. They were hilarious as usual but Seanan McGuire was one of the main reasons I went this year and I missed her. Completely! *sobs*

Day Two, Saturday, was cra-zy. That morning, we went to the PUBLISHER SPOTLIGHT: HARPERCOLLINS – Science Fiction, Urban Fantasy, Fantasy and Paranormal List Leaders panel and I failed to win either a galley of Kim Harrison's Pale Demon or a Kindle. But I did get to see and hear some stuff like how EOS books is going to become Harper Voyager in the near future. Here's some of the stuff I saw: 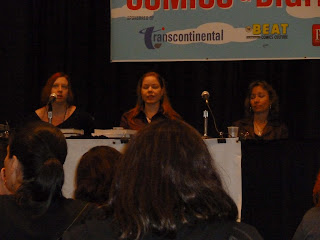 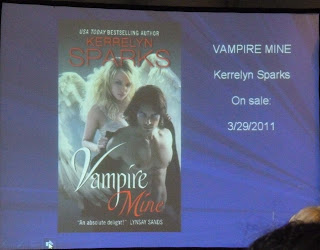 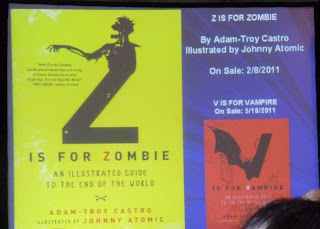 HarperCollins publishes a bunch of my favorite authors but they've turned me down more than once on Netgalley.com. I'm really trying to not take that personally. Anyway, afterward we went to the Jim Butcher thing. See if you can spot him in this picture. 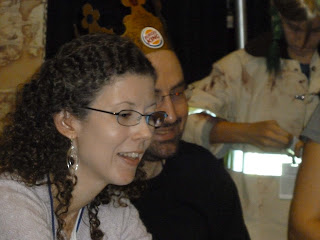 I was looking for this guy:

Maybe it was the eyebrow that threw me off? The Burger King crown? The fact that his hair was short? I just hope he didn't think I was giving him the stink eye or anything.

Once we were done ogling Mr. Butcher we left the convention for a while. It was absolutely necessary, I assure you. There was so many people around and it was driving us crazy so we went out for lunch. Yummy dim sum in Chinatown. It was definitely worth the cab fare. (Thanks Jen! Seriously, the next time is on us!) The Del Ray and Spectra books panel was that evening and some of the upcoming and already available books they talked about were so  good. These people publish mostly fantasy and sci-fi. 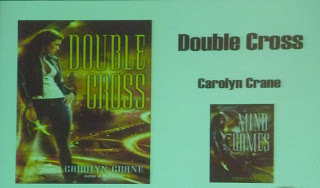 If you're going to talk about cool books, you've got to mention Carolyn Crane, right? The folks up there said lots of good things about Mind Games and Double Cross. Duh. 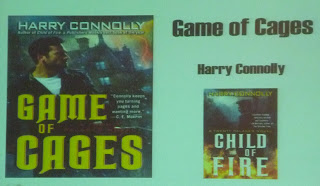 I reviewed Child of Fire last year and have Game of Cages waiting for me on my nook. I was so happy that they mentioned Harry Connolly here. 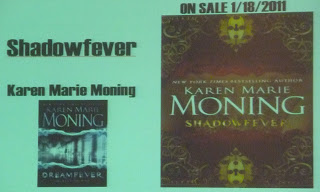 No words necessary for this one. 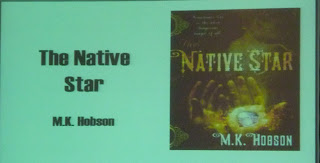 I want this book. Here's the blurb from Hobson's website:


It’s 1876, and business is rotten for Emily Edwards, town witch of the tiny Sierra Nevada settlement of Lost Pine. With everyone buying patent magicks by mail-order, she’s faced with two equally desperate options. Starve—or use a love spell to bewitch the town’s richest lumberman into marrying her.

When the love spell goes terribly wrong, Emily is forced to accept the aid of Dreadnought Stanton—a pompous and scholarly Warlock from New York—to set things right. Together, they travel from the seedy underbelly of San Francisco’s Barbary Coast, across the United States by train and biomechanical flying machine, to the highest halls of American magical power, only to find that love spells (and love) are far more complicated and dangerous than either of them could ever have imagined. 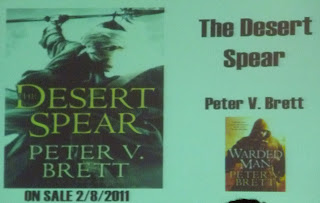 Peter Brett was awesome. He was signing free copies of The Warded Man on Sunday morning and he was so friendly and generous. He signed each book with a short note to the recipient - mine said "Jen, The sun is setting..." - and signed a bookplate that you can put in your copy of The Desert Spear. Now, I don't read much regular fantasy but The Warded Man has been on my radar for a while. 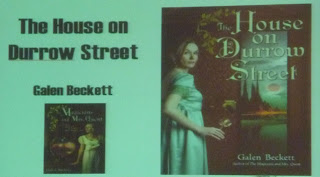 Galen Beckett's editor described this one as what Jane Austen would come up with if she wrote fantasy. The House on Durrow Street is the second in its series and I am intrigued. 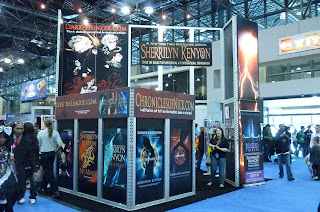 Sherrilyn Kenyon's booth was huge! I kept missing the opportunities for one of her tote bags though. 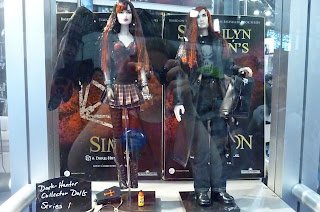 Ash and Simi figures. Simi looks too old to me and Ash's hair is too long. 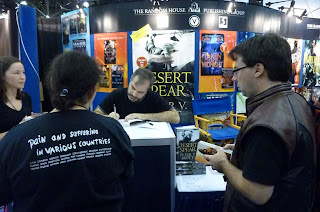 This is Peter Brett signing other books.

Anton Strout was signing Sunday as well but as I was not aware that he would be there, I did not bring any of his books. He was nice enough however to sign a post card for me. 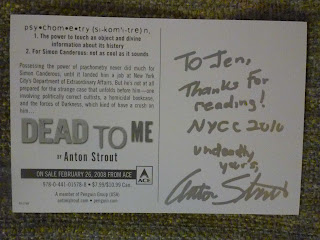 The day and convention finished up with some big panels. M. Night Shyamalan was in a panel celebrating the ten year anniversary for Unbreakable. It was interesting to hear him talk about his reactions to that movie and how he dealt with the critics. The last panel of the convention was the biggest one, no doubt about that. It completely filled up the IGN theater.

Robert Kirkman's comic book series The Walking Dead is premiering on AMC on Halloween night and so they had their first big media event for the show in New York this year instead of San Diego. It was a pretty big deal for NYCC. The panel was great with lots of footage, Kirkman, Gale Anne Hurd, Frank Darabont, and six members of the cast. Make sure you watch it! 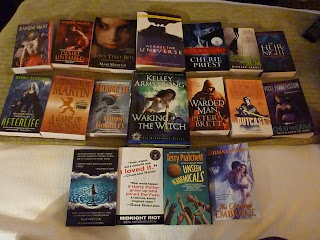 I love free books! I've also got bookmarks, a poster, and plenty of other swag. Could a giveaway be in this blog's future? Hmmm...

I did buy two hardback books while I was there just so you know. I'm not a total cheapskate. 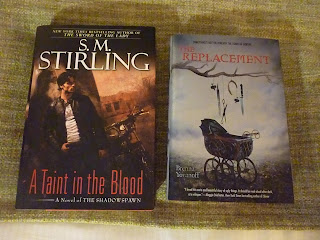 So to wrap up, NYCC 2010 rocked. You'd think with a mob like that there would be problems but everyone was just cool. I can't wait until next year.
Posted by Jen at 10:59 PM

Great post Jen! Although I'd have to disagree with taking small children to the beach being more exhausting. I'd bet my right butt cheek that even the most hyper kid would get worn out at the con.

Dude it was hilarious walking around with that tiger. I'll send you the pics I have. We still have to name him (or her). ;)

Dim sum was definitely a fun experience. No worries my dear. You can totally cover the cab fare when we do Comic Con in San Diego. *hint hint*

And by the way I'm a tiny bit jealous that I missed out on some of those free books. *pouts*

For all those considering a trip to NYCC next year...go for it! I think it's safe to say that Jen and I both highly recommend it!